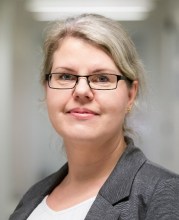 Anne Sode Grønbæk recieved her master’s in Communications and in Cultural Encounters from Roskilde University in 2005 having specialized in organizational change with emphasis on internal communication and leadership. Since then she has worked in different leadership roles both in a secretariat and an international posting as a team leader in Cambodia. After returning to Denmark she is since 2016 the daily leader of the secretariat of The Danish Smoking Cessation Database, which is based in Clinical Health Promotion Center at the Parker Institute. Her main responsibilities involve project management of the project organization, delivery on reports and data, communications both internal and external, development and execution of talks, workshops and conferences and IT-development. Last but not least Anne Sode Grønbæk is supporting The Danish Ministry of Health, The Danish Health Authorities and the Danish Municipalities on smoking cessation data in different capacities.